Welcome back to Range Valley, population 912.

Only a short one for the McKinleys. I’ve had problems with my screenshots, and a lot of them have gone walkabout. But anyway. Kate retires, as her schedule is more or less the same as Aurora’s, and somebody has to be home to watch Asher.

Though Kate never wanted kids, she finds that Asher is okay, really. He’s cute, and good for a cuddle, and when he gets to be too much, he becomes Aurora’s problem.

Kate invites over her sister, Poppy, who just had twins recently. The McKinley sisters get on better the older they get, despite their differences. 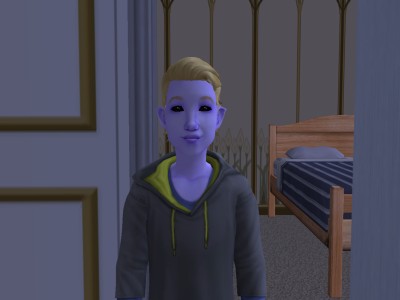 Asher ages up into a real cutie! He looks a little bit like Aurora, but those ears are his alien donor all the way.

Asher adores Kate. He doesn’t call her mum, but the love is there all the same. This is shortly before his room is made over, to suit a growing boy.

“It’ll spice your marriage up!”

“Kate, the fact that we’re two kids away from an empty house is going to spice our marriage up more than a bed.”

She bought it anyway.

Romance sims gonna romance. Aurora beds Rishell Dalton whilst Kate is playing basketball outside, and Asher is at school.

Asher maxes creativity. He is constantly painting, and sells a masterpiece within days of becomming a child.

They get on like a house on fire. I’ve said it before, but I really, really love that they bring home other playable kids instead of townies. 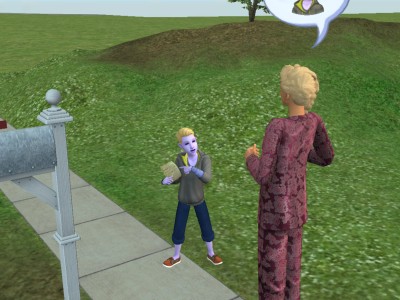 We end the round with Asher showing off his A+. Nice one, Ash.